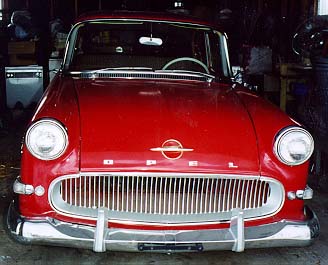 I just sold thiis car to Gary Farias (host of opelgt.com). This will be a neat addition to his Opel stable which already includes a '51 Olympia that shares a lot mechanical parts with the Rekord P.
I traded it for a laptop in 1999. It was such a good deal (at least I thought so until I found the rust in the rockers) that I towed it all the way from Western Minnesota to Washington, DC in just one weekend. This trip from hell was only possible with the help of my friend Gil and my '79 Westfalia (yes, they are good towing vehicles!). It is not perfect, but a very original car (though it was green originally). It had a fresh tune-up done only 15 miles before I picked it up - but that was in 1979 ...
Since then I have gone through everything mechanical: brakes, tires, exhaust, clutch, ignition, water pump, etc .... To make it perfect, it needs rust repair and paint. Despite the body issues it has been a fun and reliable ride which have driven to shows and meets in the mid-atlantic states and used it as backup transportation. I have the original bill of sale - I am only the second or third owner of this car.
The picture on the right is quite dated - it is one of the pics that made me buy it ... Recent pictures can be found by following the "Read more" link below.